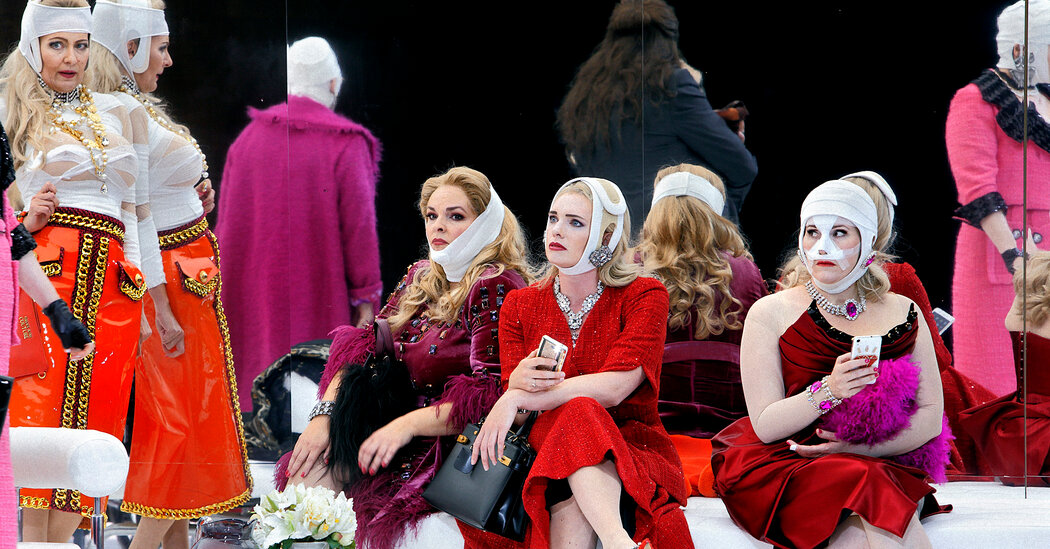 BAYREUTH, Germany – Some 150 years ago, during a megalomaniac coup, Richard Wagner built a hilltop theater here in northern Bavaria.

His immense, complex and innovative operas had never been presented as he imagined them. If he wanted them to be done well, he concluded, he would have to make them himself.

But when the Bayreuth Festival Theater opened in 1876, with the premiere of its complete “Ring of the Nibelung” – a mythical four-opera, 15-hour tale of nature and power with a cast of gods, warriors, dwarfs, giants, talking birds and spitting dragons – Wagner was always dissatisfied.

Among the most difficult problems to solve (and which, inadvertently, were laughable) were the magical effects he demanded: girls frolicking in the depths of a river; transformations into snakes; Valkyries riding through the air. Even now, with 21st century stage technology, what Wagner makes musically persuasive struggles to be so visually and dramatically.

Schwarz’s tangy, passionate, contemporary version is a “Ring” without magic or nature, in which all the characters are human, their relationships even more tangled than usual, and all events take place on a single domain.

While in the libretto the dwarf Alberich briefly turns into a lowly toad, this is only a metaphor here; it’s mentioned in the text, but nothing happens. The mighty Valkyries aren’t soaring through the sky, but bawling around a waiting room in stiletto heels, outfits in rich new flame color and plastic surgery bandages. Siegfried, the flawed hero, is given a sword – or at least a shard resembling one – but that doesn’t do anything supernatural. (Weapons here are mostly handguns.)

All this is part of the trend of demythologizing Wagnerian productions over the past 50 years, particularly in Europe. The most influential of this period were made in the shadow of George Bernard Shaw’s interpretation of the “Ring” as an allegory of anti-capitalism, with the action taking place more or less in the present and the gods depicted as members of the modern upper classes. , the nobility and bravery of the characters being mostly deceptive.

This was also the case with Frank Castorf’s last Bayreuth “Ring”, which ran from 2013 to 2017. But compared to Castorf’s cheerfully confusing staging, which often abandoned coherent storytelling altogether, Schwarz is quite straightforward in its tale of the co-dependency and acrimony that runs through a family. There are whiffs of daytime soaps in the harsh liveliness of the visuals and gameplay, and a bit of “Succession” too.

If the “Ring” is an allegory — a reach for some conservative opera-goers, but a no-brainer for many directors — the conceptual anchor of a production is the nature of gold, including the flight of the Rhine , in the opening minutes, is the sin that sets the epic plot in motion.

Gold – and the powerful, poisonous ring in which it is cast – symbolizes the commodity that the performing world values ​​most. For Castorf, it was oil, corroding political and social relations as it circulated in the globalized economy. For Schwarz, taking back the magic apples which the booklet says the gods need to keep their freshness is youth, innocence, children.

His “Ring” is full of adults obsessed with looking younger – through exercise, plastic surgery, absurd attempts at hip-fitting clothes – even though, more than in most stage productions, they’re getting older. visibly during the cycle.

This obsession turns into worrying signs of child trafficking and abuse; the slaves of Nibelheim here is a room full of identically dressed blonde girls drawing at tables. (The girls aren’t overtly hurt, but they’re clearly hoarded.) The Mime Dwarf’s Workshop is a spooky tea party and puppet theater for tattered, handcrafted dolls. And in Schwarz’s most original and inspired idea, gold is not a piece of metal, but a real young boy whose abduction embodies a society curdled by its attempts to outrun death.

The life cycle has been the focus from the start. The libretto gives the start of the “Ring” under the flowing waters of the Rhine, but Schwarz instead shows us an animated projection of a womb, in which twin fetuses are frozen in a gesture between love and fight.

This image of a family’s basic claustrophobia is key to everything that follows, as the action unfolds in and around the home of the gods, Valhalla. (The impossibly stylish alternate sets are by Andrea Cozzi, the evocative, shifting light by Reinhard Traub, and the fiercely trashy costumes by Andy Besuch.) The giants who, in the booklet, were conned into building the lair are here chic architects of a glassy expansion. Alberich is no longer of a different race from Wotan, the King of the Gods, but is his less prosperous brother.

The all-knowing Erda and the brutal Hunding are part of the domain’s ubiquitous and vigilant subclass of minions, who make silver shine while the main characters suffer. Later, Mime and the dissipated Gibichung, Gutrune and Gunther, are increasingly depraved inhabitants of parts of the estate, long after the gods have disappeared.

Wotan’s role, his hands always prancing on the most vulnerable women, is shared by the robust Egils Silins (in “Das Rheingold”) and the brooding Tomasz Konieczny (“Die Walküre” and “Siegfried”). In the second act of “Walküre” last week, Konieczny had a suitably bourgeois accident – the back of his Eames lounge chair broke and he fell to the ground – so he sat out the third act, giving Michael Kupfer-Radecky the opportunity to step in, superbly, a few nights before his manic turn as Gunther.

In “Siegfried”, the main character was sung by the indefatigable Andreas Schager, subtly revealing the adorable side of a drunken degenerate. In “Götterdämmerung”, Clay Hilley was a last minute replacement as Siegfried, and he would have been impressive even under less dramatic circumstances.

“Die Walküre” was notable for Klaus Florian Vogt’s pure, rapturous Siegmund and Lise Davidsen’s tender, surging Sieglinde, by far the most vocally resplendent performance of the week. Daniela Köhler sang brilliantly in the short but intimidating role of Brünnhilde in “Siegfried”; in the much longer “Walküre” and “Götterdämmerung”, Iréne Theorin acted with an intense commitment to the direction, but her considerable voice wavered under the pressure.

For all that is clear, even glaring, about Schwarz’s directing, there is plenty of memorable and lyrical ambiguity. Appearing periodically throughout his “Ring”, a small, bright white pyramid within a glass cube. The characters sometimes wear it, and it sometimes sits next to furniture or in a corner, but it’s never explained or explored. It’s what you think it is: a model of the pyramid addition to Valhalla; a stylized sword or spear point; purity; energy; antiquity; aspirations before and beyond the complications of reality. It is, in essence, a line of poetry, enigmatic and evocative.

Similarly, drawings of stereotypical Wagnerian faces with winged helmets continue to appear – this is what the girls do in Nibelheim – before taking the form of red masks worn by the sinister crowd of vassals in “Götterdämmerung”. Do they represent the mind-numbing weight of tradition in the presentation of the “Ring”? The hidden face of German nationalism?

Thankfully, it’s not spelled out – nor is the meaning of the ubiquitous horse figurines and toys. The most important horse in the cycle, Brünnhilde’s Grane, is, like gold, a real person here: a tall, reliable and quiet helper with an equine mane and beard.

There were indelible images throughout the week: the giant Fafner (Wilhelm Schwinghammer) rotting at home on his deathbed; Alberich (Olafur Sigurdarson) and Hagen (Albert Dohmen) face off on a dimly lit stage, empty except for a punching bag which Hagen attacks, then sadly kisses; Hagen’s slow, mournful dance as he leaves, waving Alberich’s leather jacket like a bullfighter.

And at the end of “Die Walküre”, we don’t see Brünnhilde sleeping in a circle of fire, but rather Fricka’s (Christa Mayer) last attempt to reconcile with Wotan, her husband. He walks away, leaving a single candle lit as the curtain closes, a nod to the fire of the libretto that captures the emotions of the music and the moment in a new light.

But while the abandonment of enchantment is often illuminating, it sometimes ties Schwarz in knots. Since there is no potion to make Siegfried forget – and cruelly betray – his love for Brünnhilde, their ecstatic duet earlier in “Götterdämmerung” must be staged, unconvincingly, as a fight to motivate his bitterness. And Theorin and the staging falter a bit in the final apocalyptic immolation scene, with Brünnhilde wandering aimlessly, then cradling Grane’s decapitated head as she lays down next to murdered Siegfried at the bottom of the pool. dirty and drained from the domain.

Instead, the real hit of “Götterdämmerung” is the realization, earlier, that the kidnapped Rheingold-boy has grown up to be the embittered and ambivalent Hagen. Painfully, in Schwarz’s staging, we see him treat Brünnhilde and Siegfried’s young child (an addition to the libretto) as harshly as he does — the wheel of fear and abuse keeps turning.

And the final production image is a rehash of the first: again, twin fetuses, but this time in a seemingly peaceful embrace. Is this peace lasting? Or will the birth inevitably lead to renewed resentment, betrayal, and violence? With admirable restraint, Schwarz does not define whether he thinks a sick world is capable of changing.

The Ring of the Nibelungs

Until August 30 at the Bayreuth Festival, Germany; bayreuther-festspiele.de.

HER DAY, a new opera