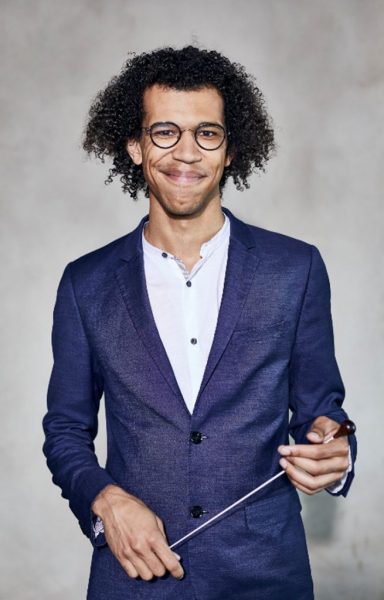 BALTIMORE – The Baltimore Symphony Orchestra (BSO) announces the appointment of 29-year-old American-born conductor Jonathon Heyward as Music Director and Harvey M. and Lyn P. Meyerhoff Chair. Heyward’s five-year contract begins in the 2023-24 season. He will serve as Designated Music Director for the upcoming 2022-23 season and lead two weeks of performances in May 2023.

Heyward’s selection was unanimous by the Baltimore Symphony Music Director Search Committee, made up of BSO musicians, staff and community members. In March 2022, he conducted three performances, including the first-ever performance of Shostakovich’s Symphony No. 15 by the Baltimore Symphony. Quickly rehired, he returned in April to conduct a benefit concert for Ukraine at the Meyerhoff.

“It is a tremendous honor to join the Baltimore Symphony Orchestra at this exciting time in its long and distinguished history,” said Heyward. “I believe we have a great opportunity to build on the legendary accomplishments of the orchestra under the inspiring leadership of Marin Alsop and explore the many ways we can reach the greatest number of people at home and abroad. . I am passionate about the power of symphonic music to bring audiences together and speak to all communities. The irresistible artistry, energy and optimism of the Baltimore Symphony was clear to me from the first moment we rehearsed together earlier this year. We shared a special chemistry at the time and in the concerts we’ve given since. I can’t wait to see where this can take us in the years to come. »

Heyward begins his five-year contract in the 2023-24 season and follows industry pioneer Marin Alsop after a 14-year tenure as BSO Music Director and BSO OrchKidsFounder.

“In addition to being an exceptional musician who has been very well received by the orchestra, Jonathon is a visionary leader who has the potential to connect to our communities, be visible around the world and be an ardent advocate for music and musicians,” said search committee chair and Johns Hopkins University provost Sunil Kumar. “As an alumnus of the Charleston, SC public school system, Jonathon’s passion for fostering inclusive educational experiences, such as the BSO OrchKids program, will help define not only the future of community impact of the BSO, but also the cultural imprint of Maryland. ”

Heyward began his musical training as a cellist at age 10 and began conducting while still in school. He studied at the Boston Conservatory of Music, where he became assistant conductor of the prestigious institution’s opera department and the Boston Opera Collaborative. He then received postgraduate tuition from Sian Edwards at the Royal Academy of Music in London and was appointed assistant conductor of the Hallé Orchestra, where he was mentored by Sir Mark Elder. Heyward is currently Chief Conductor of the Nordwestdeutsche Philharmonie.

“The appointment of Jonathon Heyward as Music Director is both incredibly inspiring and ambitious,” said President and CEO Mark Hanson. “We are inspired by his artistry, his passion and his vision for the BSO, as well as what his nomination means for aspiring musicians who will see themselves better reflected in such a position of artistic prominence. At the same time, he is a rising star, and his dynamic talent, bold programming, and fervent commitment to community engagement will continue to grow our relationships with Maryland’s many communities.

“The magic happened when Jonathon took the stage in March, and the chemistry between him and the orchestra was evident from his first moments on the podium,” said percussionist and Players’ Committee Chairman Brian Prechtl. “Jonathan’s unique programming, strong communication skills and ability to push the orchestra with new ideas demonstrated some of the most important musical traits we were looking for in a Music Director”

As Designated Music Director, Heyward returns to the Baltimore Symphony next May for performances of two concert programs (May 4-7, 2023 and May 19-21, 2023). Audiences can also learn more about Heyward through the BSO’s docuseries, BSO Sessions, on BSOmusic.org/In the wings and on the BSO’s social media platforms.

About Jonathan Heyward
Originally trained as a cellist and chamber musician and an alumnus of the public school system in Charleston, South Carolina, he first became interested in classical music at the age of 10. As his career progressed, Heyward served as Assistant Conductor in the Opera Department of the Boston Conservatory and the Boston Opera Collaborative, where he worked on productions such as La Bohème, Die Zauberflöteand The Rape of Lucretius. In 2013, Heyward became the youngest semi-finalist in the Blue Danube International Opera Conducting Competition at the age of 21, and soon after was appointed Associate Director of the Hampstead Garden Opera Company in London. Winner of the 2015 Besançon International Conducting Competition, in 2016 he completed his graduate studies in conducting with Sian Edwards at the Royal Academy of Music. During the 2017–18 season, Heyward was selected as a Los Angeles Philharmonic Dudamel Conducting Fellow, later stepping in to make his subscription debut with Hilary Hahn as part of the orchestra’s [email protected] celebration at the Walt Disney Concert Hall.

At the end of the 2018-19 season, Heyward completed three years as Deputy Conductor of the Hallé Orchestra under the mentorship of Sir Mark Elder. Currently conductor of the Nordwestdeutsche Philharmonie, in the summer of 2021 Heyward took part in an intense two-week residency with Britain’s National Youth Orchestra which led to a highly acclaimed debut at the BBC Proms.

Since 1982, the BSO has performed at the Joseph Meyerhoff Symphony Hall in Baltimore, and since 2005, with the opening of the Music Center at Strathmore in North Bethesda, MD, the BSO has become the first orchestra in the country to play its full season classical and pop music. concerts in two metropolitan areas. More recently, 2020 marked the beginning of a new era of art, innovation, stability and digital accessibility, including the launch of the BSO OffStage virtual platform and a groundbreaking docuseries BSO Sessions. More information about the BSO can be found at BSOmusic.org. The conductor of the Met Opera abandons the “Figaro”