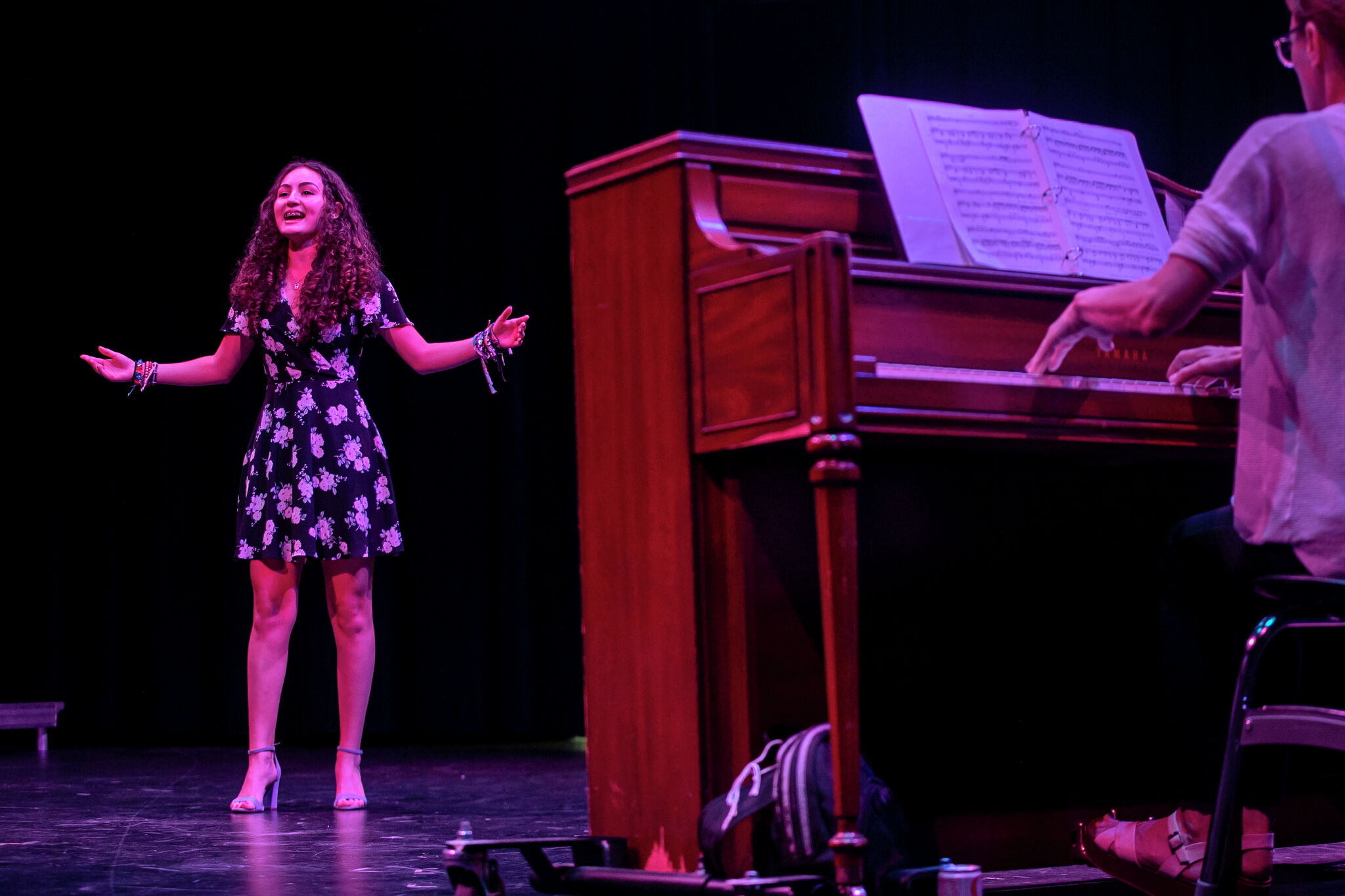 Students at the North East School of the Arts have spent some of the shrinking hours of their summer break on campus, hoping to land roles in the three major theater productions slated for the school year coming.

On Tuesday afternoon, experienced performers entered a black box theater at the Performing Arts Center on the LEE High School campus, heading to the piano to hand in their sheet music. They sang segments of carefully chosen songs, then delivered short monologues.

Some newcomers to Magnetic High School, unsure of how the audition would go, asked where they should stand and sometimes included their age when introducing themselves. One didn’t know until too late that sheet music was needed and ended up singing “Sit Down You’re Rocking the Boat” from “Guys and Dolls” over a music track on his phone.

The teenagers were trying out roles in “The Little Mermaid”, “The Crucible” and “Funny Girl”. Beyond that, many hope to follow the paths blazed by NESA alumni on stage and in film.

“We pride ourselves on being a professional training ground,” said Daniel Everidge, who is entering his second year as director of the school’s drama program. “You can get theater training in many places, but it’s real professional knowledge needed to give you a head start in the world of musical theater and acting.”

Everidge, 38, knows what he’s talking about. He graduated from NESA in 2002, and his professional credits include the hit film “The Greatest Showman” as well as the 2007 Broadway revival of “Grease.” new operas and musicals and Edwin Bates, who is understudy and dance captain for the Broadway musical “A Strange Loop.”

David Connelly, who retired about a year ago after leading the school’s theater program for more than 20 years, keeps tabs on many of his former students, reveling in their successes and offering advice and encouragement.

“It’s been a journey to remember them at 14, to walk into their ninth grade performance classes nervous and looking for their way, and now to experience the thrill of seeing them really DO!” , he said in a Facebook post.

Everidge decided to switch to teaching during the pandemic shutdown after he and other alumni helped with a Zoom audition class for NESA. Connelly revealed he planned to retire and encouraged him to apply for the job.

“It felt a bit like a fantasy movie where the master passes the throne to his young trainee,” Everidge said. “It’s almost like I got to do ‘Greatest Showman’, I got to do one of the pinnacle of anything I could do in my career. And now I could give back.”

Everidge played the Lord of Leeds, one of the show’s “oddities” in the 2017 film, which starred Hugh Jackman.

“We were rehearsing all day and then they would bring in Hugh Jackman. He knew everybody’s name and he said hello and goodbye to everybody,” he said. “He had this fun thing on Fridays where he was handing out scratch off lottery tickets to everyone in the building. So rehearsals were just a joy. I was dazzled every day.”

It was Everidge’s second film. His first was the 2013 Coen Brothers film “Inside Llewyn Davis”, in which he had a small role as an Irish musician.

“I have two great movies on my resume and I’m very proud of both,” he said.

Treat, a 2009 NESA graduate, started as a dance student. She’s not sure why, but Connelly insisted she was in the wrong place, and in her senior year she became a double major, studying dance and acting.

“He always felt like that was the career for me,” she said. “I spoke with him recently and had this really genuine moment of saying, ‘You know, my whole career is because of you.

“But then I was like, ‘Actually, this is a horrible career, so I guess another way to frame this is I can blame you for my whole career,'” she added in laughing. “I ask him to reflect or blame him, depending on the day. Anyone who works in theater understands that.”

Treat, 30, has forged a career as a choreographer and director specializing in new works of musical theater and opera. At the moment, she is in Cooperstown, New York, performing a double bill for the Glimmerglass Festival, the prestigious opera company. The works are the world premiere of ‘Holy Ground’, Lila Palmer and Damien Geter’s imagination of the hunt for a woman ready to give birth to the messiah; and “Taking Up Serpents” by Kamala Sankaram and Jerry Dye, about a preacher’s estranged daughter who is bitten by one of his snakes.

“Directing at Glimmerglass is definitely the most prestigious job I’ve had at this point in my career, so it’s a really huge and exciting deal,” she said.

Connelly helped her develop her skills after graduating from NESA, including inviting her back to direct a school production of Federico García Lorca’s “Blood Wedding.”

“I thought the production was so wonderful, and it was the first time I was flexible and people trusted me and said, ‘Do what you want to do,'” she said. . So NESA and Mr. Connelly have been that force that encourages a variety of different milestones in my career.”

Bates, 28, leans on some of their NESA training every time they take the stage in “A Strange Loop.” Bates is a dance captain and is studying three roles, including the lead, in the hit musical.

“It really helped you understand how to dig into the work and access the emotional places, and that it’s possible to let those things go so you don’t have to carry them through the day,” they said. “It’s so important now because the content of ‘A Strange Loop’ is very heavy. If I took all that into my everyday life, I don’t think I could stay afloat.”

“It’s so special, especially as a black, queer, transgender person,” they said. “There are so many little pieces of me that make me who I am that people can relate to, and I hope it inspires them to see themselves in their imaginations in places like this and d ‘a way that actually helps them get there.”

Bates came to work on the show after touring with “Beautiful,” Carole King’s jukebox musical in which they played one of the Drifters and also served as dance captain.

Their passion for dance took root at NESA. It was there that they learned, among other things, that it is possible for a taller person to pursue a career in dance, which had not seemed like a possibility before.

“I literally pinch myself every time I’m able to,” Bates said. “Every time I read that I’m the dance captain of a Broadway show, it’s too cool for me.”

The winner of the Jimmys

Some students can put the skills they learn at NESA to good use while they are still in school. Nicholas Barrón, 17, spent the first three years of high school at NESA. In June, he became the first San Antonian to win one of the top two awards at the National High School Musical Theater Awards, also known as the Jimmy Awards. Barrón competed in a group of 92 young artists from across the country.

He said the training he received at NESA helped him compete. It was particularly useful to know how to fine-tune the vocal performances.

Here are five other performers who studied at the North East School of the Arts and went on to pursue high-profile performing careers:

Cody Garcia: Filmed as Willy Wonka in ‘Charlie and the Chocolate Factory’ and starred in Disney Cruise Lines productions of ‘Beauty and the Beast’ and ‘Tangled’.

Jared Howelton: Credits include Chicago and Broadway productions of “Hamilton,” shot in “Motown: The Musical” and “Shrek: The Musical.”

curtis Holbrook: Broadway credits include “SpongeBob SquarePants,” “If/Then,” and “The Addams Family.” Films include “Across the Universe” and “Hairspray”.

Andy Richardson: Appeared in “Newsies on Broadway” and national tours of “Wicked”, “Kinky Boots” and “Newsies”.

“You really get a bit of an upper hand knowing how to break down a song and how to get inside that character’s head,” he said.

Even so, he decided to attend a different school for his senior year. Jimmys’ win created the possibility of some performance opportunities that might be difficult to take advantage of if he stayed at NESA, he said.

“I want a little more opportunity to have a little more freedom with my schedule,” he said. “It’s a very rewarding schedule, but it’s tight. With a few job opportunities coming up, I wanted to keep this a bit open.

“Nevertheless, I’m really grateful for what I was able to learn there.”