OOnly someone who has lived for centuries could know how to find long-hidden evidence to help settle a protracted legal dispute over an inheritance. In Janáček’s penultimate opera, singer Emilia Marty lived for 337 years, was originally called Elina Makropulos, and assumed different identities over the decades, while using the same initials. But tied to his interest in the Gregor vs. Prus case is Marty’s desperate quest to find the secret formula for the elixir that granted him immortality. As the young daughter of Hieronymus Makropulos – physician to the Holy Roman Emperor or Rudolf II who ordered Makropulos to find a way to prolong his life – Elina was the unfortunate guinea pig.

Setting it in the 1920s when the opera was written, and worthy of a story whose heroine aspires to be the greatest opera performer of all time, Olivia Fuchs‘ new production for National Opera of Wales looks suitably exaggerated and flamboyant. It’s also all in one piece with the often tumultuous feel and fast flow of Janáček’s music, delivered here enthusiastically by the WNO orchestra under the direction of its musical director, Tomás Hanus. Co-editor of new edition of the score being used, Hanus’ affinity with Janáček was still evident, with delightful details emerging.

In Nicholas TurnerThe conception of , the sets of the three acts – the notary’s office, the backstage of the theater where Marty has just sung, his hotel room – have brought a certain clarity to the complex narrative, sung in Czech. Ironically, what didn’t work out was when, between the first two acts and covering the set change, Marc LeBrocq as himself and as Vitek, the clerk addressed the audience in English explaining who was who. It just sucked.

As diva roles go – Elisabeth Söderström sang in the 1978 WNO production – this one demands a commanding presence and a soprano Angeles Blancas Gulin was certainly that. Amply taking on the vocal challenge, she brought an almost brutal physicality to encounters with the various men whose passions are aroused – young Janek is driven to suicide – and her native Spanish flair colored Marty’s reunion with her former lover, the Baron Hauk (Alan Oke). In the uniformly strong distribution, Nicky Spence and David Stout were excellent like the litigants Albert Gregor and Baron Prus.

The central deeply philosophical question of whether immortality could actually be desirable is at the heart of the final scene when Marty’s hitherto cold demeanor begins to thaw, the aging process now accelerating. In his final exhortation to those around him to celebrate their unique existence, Janáček’s vital purpose is manifest, music radiant. Significantly, Kristina (Harriet Eyeley), the young singer to whom she offers the ancient parchment detailing the elixir, sets it on fire. This is the signal for Marty to finally expire. 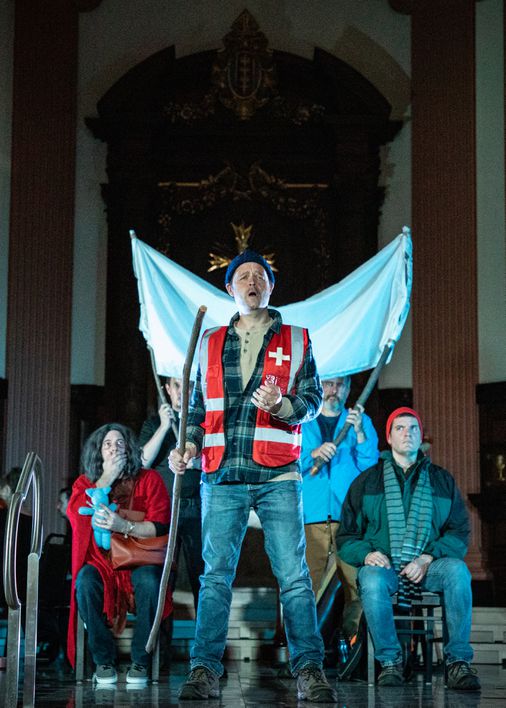