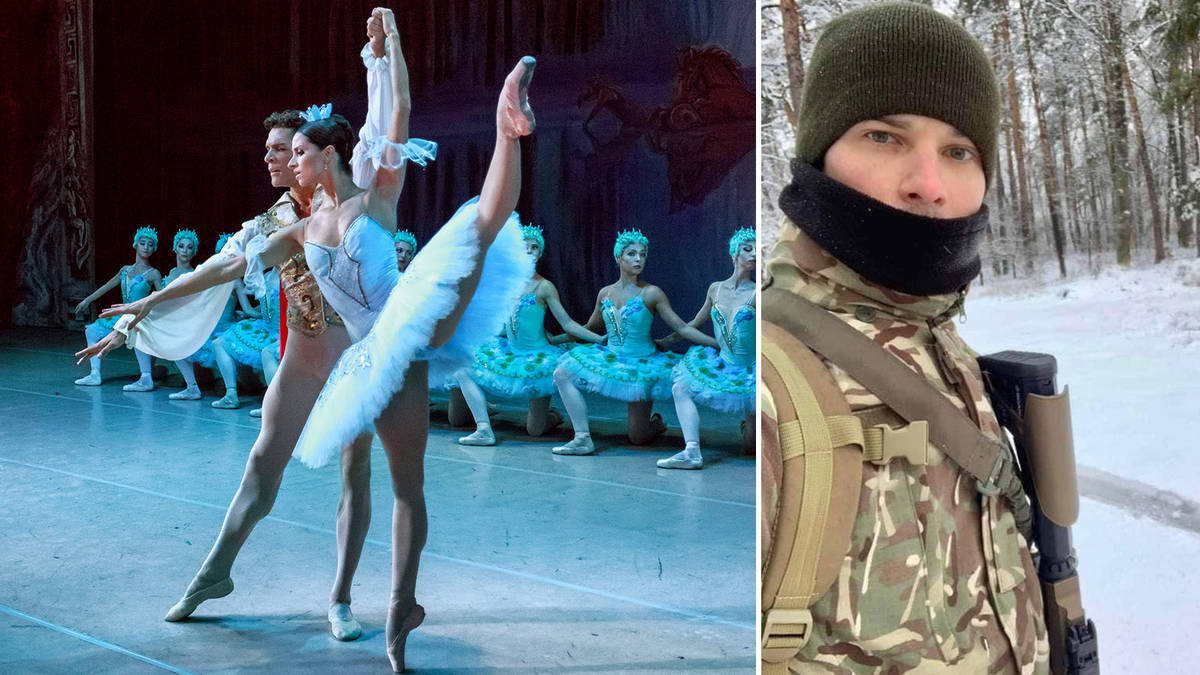 As Russia continues to invade Ukraine, ballet dancers are among Ukrainian artists and musicians taking up arms.

Two dancers from Ukraine’s main opera company have hung up their ballet shoes to join the armed forces after Russian President Vladimir Putin launched an attack on Ukraine last week.

Images have circulated online of a principal dancer and ballerina at the National Opera of Ukraine in Kyiv, in camouflage gear holding weapons.

Main dancer Oleksii Potiomkin, who tells his story on Instagram, is currently fighting in Kyiv. Her story went viral after Ukrainian American writer Natalia Antonova, who wrote for The Guardianposted about the dancer on Twitter.

The guy on the left is Oleksiy Potyomkin.

The guy on the right is also Oleksiy Potyomkin.

The ballet dancer is committed, like many people from all walks of life in Ukraine. pic.twitter.com/Jblg0HvEKy

“The ballet dancer is committed, like many people from all walks of life in Ukraine.”

Potiomkin danced the role of the prince in the Kiev Opera company Nutcracker at the Théâtre des Champs-Elysées in Paris, France, and was principal soloist with the Royal Winnipeg Ballet of Canada and the Ochi International Ballet in Nagoya, Japan.

Lesya Vorotnyk, a ballerina with the company, also took up arms following Ukrainian President Volodymyr Zelensky’s call for “anyone willing and able” to fight, as Russia continues to invade Ukraine.

In a speech on February 24, President Zelensky rallied his citizens and said Kiev would provide arms to anyone who wanted to use them.

“We are already distributing arms and we will distribute them to defend our country to anyone who is willing and able to defend our sovereignty,” he said.

Zelensky also appealed for international support, offering to provide arms to “friends abroad” willing to join the fight. “We will fight as long as it takes to liberate our country,” he promised.

Read more: The Ukrainian opera baritone sings the national anthem at 10 Downing Street in a ‘call for peace’

Vorotnyk and Potyomkin are two of many artists in Ukraine’s thriving music industry who left their families and professions to protect their country from invasion.

Andriy Khlyvnyuk, lead singer of rock band BoomBox, said he would “take [his] children in a safe house” and fight for his country, after Vladimir Putin launched an attack on Ukraine last week.

“Musicians are peacemakers,” he said. EuroNewsbut “now is not the time to play the guitar. It is time to take up the guns.

Some artists use their platforms to report on the war through their social networks.

Svyatoslav Vakarchuk, lead singer of Ukrainian rock band Okean Elzy, posted videos on Facebook in which he is seen visiting injured soldiers in hospital, wearing a bulletproof vest and delivering food and fuel to Kyiv In his car. The group also performed an impromptu concert on Kiev’s Glass Bridge to show solidarity with the Ukrainian capital.

Other artists, meanwhile, use music to raise funds to help those displaced by the conflict. Olga Korolova, one of Ukraine’s leading techno DJs, donated her most recent gig fees to the Ukrainian military and charities helping those displaced in the conflict, and launched a fundraiser on YouTube titled #prayforukraine, instead of his usual music videos. Q & A: Tenor Iván Ayón-Rivas on his year of discovery and “Macbeth” at La Scala