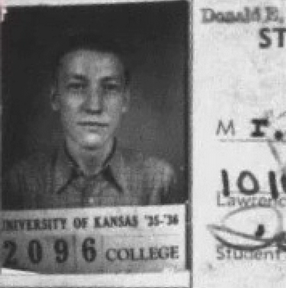 Frank Narwot first learned of Don Henry’s short life and sacrifice while peeking on a trivia game at a brewery in Lawrence, Kansas.

“I read his story,” said the Wichita State University guitarist and music professor, “and I was, like, ‘OK, I have to write music about it.’

What a muse. A middle schooler from bucolic Dodge City, Kansas, radicalized by friends and professors at the University of Kansas, lied to his family so he could fight the fascists during the Spanish Civil War of the 1930s. Then he died on the first day of his fight. A quest, a cause and a death worthy of the scene.

It took Nawrot about five years, but in September he released the first opera about Henry’s story. Nawrot’s “Don Henry” is a four-part series available on many podcast platforms. His sound straddles genres.

“I grew up listening to, you know, Prince and (Swedish metal band) Meshuggah, popular music,” Nawrot said. “So the music I create and the music I play kind of blends those two worlds together.”

“Opera experts, I don’t know if they’re going to call it an opera or not…I have no problem with it being called an opera or a rock opera or a concept album or whatever. Either,” he added. “As long as they listen to it.”

A boy from Kansas

“He was a religious boy,” Nawrot said. “He went to church and did all the normal things a young guy from Kansas would do.”

A short history of Henry’s life written by Brian Drake, formerly of the KU History Department, says that Henry was an active Boy Scout, a member of his high school’s debate club, and a devoted Methodist who considered a career in the church after graduation.

“It came as a considerable surprise then, when a front-page article in the University Daily Kansan of October 3, 1937 revealed that ‘Linen-haired Don Henry’ had been killed in action the previous month, fighting in Spain with the Loyalists of left against right-wing nationalist rebels led by General Francisco Franco,” Drake wrote.

According to this 1937 edition of the KU student newspaper, Henry and another KU student had traveled to Spain four months earlier and joined what was called the Abraham Lincoln Brigade.

“It was at a time when Mussolini had come to power, then Hitler and then in Spain…there was the threat of Francisco Franco, who was a different sort of racial nationalist figure,” Nawrot said. “So Don Henry and thousands of people around the world, from all over the world, became members of what are now called the International Brigades.”

“He went to a foreign country to fight alongside people he’s never met to stop an idea from spreading,” Nawrot said. “It gives me goosebumps to think about.”

News of Henry’s death sparked a political storm when it reached loved ones in Kansas. Henry’s father blamed his son’s college experience for his decision to go to Spain and asked KU Chancellor Ernest H. Lindley to launch an investigation.

Lindley’s personal investigation was followed by a different investigation by the Kansas Board of Regents. Drake’s story indicates that three regents were asked to look into “communist activity” on campus. In turn, Topeka lawmakers launched their own investigation into radicalism at KU. The regents’ report was eventually sent to the United States House of Representatives Select Committee on Un-American Activities.

To help push this narrative, and listeners, into the 21st century, Nawrot’s opera used what at first sounds like the prototypical cable newscast.

“I thought it would be funny, to be honest,” he said. “What if Fox News or, you know, CNBC or one of those other all-news channels covered the Spanish Civil War of the late 1930s?

The result looks like an amalgamation of conservative media personalities Megyn Kelly and Bill O’Rielly.

Nawrot’s libretto, or opera text, also derives from the Kansas Board of Regents report, poems written by members of the British International Brigade, and a letter sent by Henry to his family before his death, revealing the nature of his trip to Spain.

“At the very end, he says, ‘Oh, by the way, PS, can you send me some socks?’ Nawrot said. “It gives me chills to think that he was brave enough at some point in his maturity to do what he did, but also to still be so connected to his family.”

With his opera now out in the wild, Nawrot’s hope is to stage it.

But he has a recording and a proof of concept to present.

A cornucopia of Mozart for his 266th birthday!